I guess i have been very slack and haven't really updated my blog in ages. Well I have been too busy working on costumes and life in general and have kinda forgotten about it. But alas im here now. 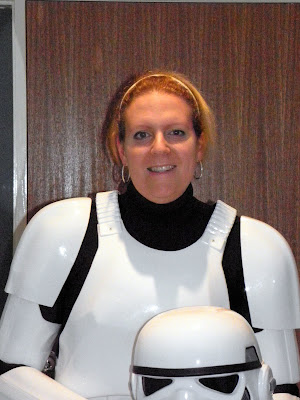 The storm trooper costume is now complete and has been officially approved by the 501st as meeting its costume standards (or CRLs) as people call it, well it has been for a couple of months from writing this entry. 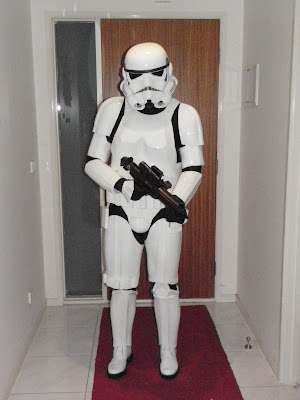 http://picasaweb.google.com.au/aprilstaines/TK7334?feat=directlink
One of the fiddly things that I had to fix was the belt, which in my first ever attempt was made from plastic. This is unacceptable according to the new standards for 501st and must be made from canvas or a canvas/textured like material.
I made mine using a fire hose like webbing that I purchased from a leather supplier in Melbourne called Leffler. http://www.leffler.com.au/
Posted by April Staines at 6:59 PM No comments:

How I made my canvas belt for TK storm trooper

What you need:
Once constructed, this belt seems to sit much better than my previous plastic belt.

The plastic inserts up are sewn in place, but can slide about 5cm if need be. The belt goes on like a regular belt and velcros up the back

Sewing the velcro in sections prevents it from kinking when it goes around the curve of the back and allows the thermal detinator to slide in.

The front section simply velcros onto the belt.
Posted by April Staines at 6:51 PM No comments:

The next costume- storm trooper

Ok, well I have always been impressed with the whole TK storm trooper armor thing, it always looks impressive

- Posted using BlogPress from my iPhone

Posted by April Staines at 3:29 PM No comments:

The following is based on my experiences building a locally (Australian) made TK storm trooper kit moulded using HIPS high impact polystyrene and products that are easily sourced in most Melbourne hobby shops.

One of the problems I realized I would have when I started to assemble my kit was that some of the pieces did not line up perfectly with their counterpart and that any adhesive would need to be pretty good and flexible to deal with the stress when the parts are stretched onto place. Also hips seems to be a bit more brittle than ABS be it lighter and nicer looking in finish. This in my limited experience had both advantages and disadvantages.

When I asked my supplier of the kit (mouldman) what glue I should use with this I was a little supprised when he responded with "selleys superglue" as my experiences with superglue was that it is brittle and hopeless with plastic, but alas it does work, mostly because it's acetone based. But still needing more convincing I purchased every product I could find in both a hardware store and a hobby shop that looked like it could work including superglue. 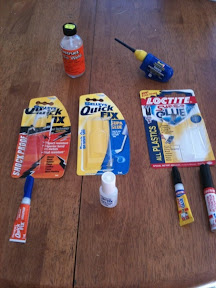 In no particular order:

I then proceeded to test the product on some of the offcuts from trimming the kit.

- Posted using BlogPress from my iPhone

Posted by April Staines at 2:33 PM No comments:

Well this weekend was the first time I have ever been to a comic con kinda convention and it was totally awesome.

I have a few favourite memories from the weekend but on all it was the passion and outright talent exhibited by all the costumers that showed, and I was really only there for 4 to 5 hours on Saturday, so I'm sure there where plenty more that I didn't see.

Unfortunately I never got around to finishing (there is one in the works) a new costume for the event and showed up in my by now trusty Alema Rar, twi'lek Jedi which has served me well for a number of troops at science works. I shouldn't be disappointed as I still really love this costume and have worked out pretty much all of the kinks.

I think the think that I have most noticed with costuming is that not only is it very addictive, but the urge to try bigger, better, more elaborate costumes is very strong. 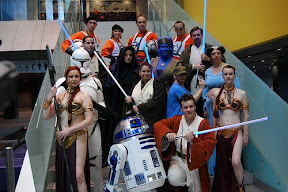 I will post a link to some pics just as soon as I figure out how from an iPhone.


- Posted using BlogPress from my iPhone

Posted by April Staines at 2:54 PM No comments:

As far as i can tell there are three main things to get right in order to perfect the Twi’lek Jedi costume: The Lekku, the makeup and the Jedi garb itself.

The Lekku
As i mentioned earlier, I did not make my own Lekku, but through contacts in the Rebel Legion managed to find someone who seems to have perfected the art of making them and will make them for others for a reasonable fee. The other part of the headpiece can also be the headband, and again, i resorted to purchasing a replica Aalya Secura headband and then making some minor modifications to it.

One of the things I was the happiest with was my decision to use a combination of cloth tape, and self adhesive Velcro as a means to secure the Lekku to the headband (seen above) and prevent it from sliding back, which will happen because of the weight, especially if you run (that’s another story)

The makeup
Although this might seem like it would be the easiest part to get right, its supprising how much time and effort will go into trying to get the correct colour and the correct makeup for the given situation. My first costume, the Pantoran X-wing pilot used blue Kryolan water based cosmetics, called Aqua. If you live in Melbourne, you can purchase these from their retail store at 147 Little Collins street Melbourne VIC 3000 (They used to be also known as "Backstage Makeup"). A small tub will cost $14, and a large one $33. You may want to purchase a dark colour or black should you want to highlight lips and eyes.
One of the main things you will need to weigh up is how easy or hard you will want the makeup to stay on and the type of environment you are likely to use them in. For example, the aqua variety are fine as long as its not too hot and you don’t sweat too much. Plus you can also get spray on sealer, but this is also water based and fairly expensive. As i type this I am about to embark on a journey into the oil based variety as we enter the summer months and I find the aqua solution not as good, especially on certain parts of the body.

For the Pantoran i used I use the Kryolan Aqua 093 as well as 501. For the Twi’lek, I think the 501 is way too dark, but I know a girl who uses that colour and it seems to work well for her, so i guess its a personal thing.

The Jedi Garb
It should be noted that because my costume does not have a robe it does not qualify as a formal costume for rebel legion. And the one thing i still have to figure out is how to make a robe that will also accommodate the lekku. I suspect this will be another topic one day soon.
Rather than sew the entire costume from scratch, which would probably produced a better finished product I decided that I would order a complete mace windu costume from costumebase in Singapore and try to modify that. The main reason for me doing this wasn’t so much that Im lazy and cant sew very well (although that is a factor) its because when i went on ebay looking for a Jedi belt which is something im pretty sure i couldn’t just make, i found that the cost of purchasing a belt on its own and getting the entire costume wasn’t as big a difference once shipping was included and i thought that in the worst case scenario, i could just give the costume away or modify it for my little boy to wear. However once i got it, i realised with some modifications the main robe and tunics would do nicely for my costume. There where two things that needed to be taken in. As the robe is made for a male, the front overlap has been designed to wrap over the wrong side for a female, and this needed to be taken in. Also, the collar was cut for a male with very wide shoulders and that needed adjustment also.

If you can see the photo above, i took in about an inch or in some parts more all the way around. This does cause some problems with the lines of the tunic, but i think i was able to get away with it, be it far from perfect.
The tabarbs also are a tad too wide for a female in my opinion, so these had to be narrowed by about an inch.

The next was the tabarb thing that goes under the belt. I had decided that i wanted some contrast with the traditional shades of brown and tan. So i had decided to go with a deep purple and made this from scratch.
Posted by April Staines at 3:27 PM No comments: 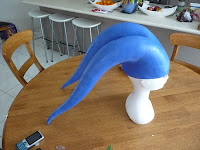 Anyway, about two months later i had my Lekku, but needed the rest of the costume, for I had decided on a Twi'lek Jedi
Posted by April Staines at 6:48 AM No comments: